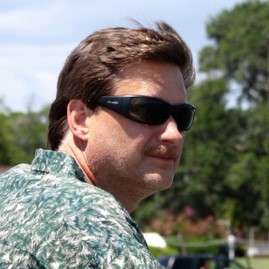 My name is Lance Carney and I have just turned the fabulous age of 59.

I have lived in the state of West Virginia in the United States all my life (and no, it is not the same state as Virginia). My home away from home is Oak Island, North Carolina where my parents built a vacation home several years ago.

I have been a hospital pharmacist/director for 35 years at a small hospital in West Virginia. My lovely wife of 31 years, Kathy is also my editor (can’t get anything past her). We have a son Ryan who graduated from Mississippi State University College of Veterinary Medicine in 2018 and is practicing in Fairfax, Virginia. Our daughter, Jillian graduated from UNC-Wilmington in film studies and is in Los Angeles working for Walt Disney Animation (look for her name in the credits of Frozen II!)

I have a plugged punctum. It sounds dirty, but it is actually plugged tear duct drainage in my right eye…wait, did you mean my latest writing news? I just released my fourth novel “Of Vamps and Vampiros: A Finnian O’Dwyer Universal City Crime Cape(r)” about a young Irish immigrant who finds his way to Hollywood and becomes ensnared in a murder mystery on a film set.

We were forced to write a short story in senior English in high school and I discovered it was kind of fun (thank you Mrs. Jones!) It wasn’t until I was a practicing pharmacist that I began writing short stories again. There were numerous small press magazines (pre-internet) and I submitted to them, collecting rejections along the way until I got most of them published. A friend of mine from high school was also writing at the time, and we wrote several stories together as well (alas, he does not write anymore since he is a hermit living in a cave). I took a break from writing for several years when my children were in school and involved in every activity known to man. I had always planned to write a novel when I retired, but once both children were in college, I realized I had time on my hands so I started writing “Ripped Tide: A Daniel O’Dwyer Oak Island Adventure”.

Before I finished the first draft of my second novel, “No Egrets”, I was already planning the third one in my head. Finishing the first draft of the third book, “Mantis Preying”, the character of Finnian O’Dwyer began evolving and begging for a story to be told. So I guess as long as the story ideas keep coming, I consider myself a writer.

Having written lots of short stories, a novel was the next logical step and something I always wanted to do. As Mark Twain said, “Write what you know”, so I picked a pharmacist for the main character with scenes taking place in a hospital.

The setting for my first book (and next two) is Oak Island, North Carolina and the plot revolves around drug diversion/abuse so the title became “Ripped Tide”.

With a full-time pharmacy job, I honestly don’t have time to write an outline and plot out the whole story before I write it. If I did that, it would never get written. I have a general idea and a few characters in my head and I start writing. It is great fun to see what new characters pop up and which direction they take the story. The only challenging part is to make sure it comes to a satisfying conclusion and all the loose ends are tied together.

Unfortunately, I have dealt with drug diversion quite a bit over the years. It has certainly gotten worse. In “Ripped Tide”, it is a humorous take on this serious subject.

Yes! I want to go to Oak Island as many times a year as my job allows. As for “Of Vamps and Vampiros”, I didn’t actually get to visit Universal Studios Hollywood until after I finished the book.

Jacob Howell, my daughter’s boyfriend during the first two books, fiancé during the third and husband during the last one. I crudely sketch out the idea (somehow Jacob keeps a straight face when seeing it for the first time) and then he magically makes it appear a hundred times better than I imagined.

My books are filled with quirky characters, and while that quirky character in your life may annoy the hell out of you, we are all in this together. Quirky makes the world go round.

I have partnered with six other humor authors for a book of short stories named “True Wit: Stories from Humo(u)r Writers from Around the Globe”. I have been reading their novels and really enjoy their work: John Martin from Australia, Rob Johnson from the UK, and fellow Americans Mark Cain, Lisa Shiroff, Bill Cokas, and John Parrot.

Is Facebook an entity? Friends on Facebook have been very supportive and were the ones that bought and reviewed my first book. Since then, I’ve learned the marketing side enough to gather some outside readers and fans. But I wouldn’t be anywhere without my Facebook friends. Thanks for not unfriending me guys, when I kept bombarding you with my books!

I view pharmacy as my career at this time and writing as a stress-reliever to that career. I am hoping to retire within five years and at that time, with a little luck, writing may be my career.

Not really. I am very proud of “Of Vamps and Vampiros”. It is the first period piece I have written and I had to research not only the 1920s and ‘30s, but Hollywood as well. I felt like my writing has improved and it is the best book I have written.

Fiona: Did you learn anything during the writing of your recent book? 2011195

So much! I had to research the time period, early Hollywood, Irish immigrants, Universal Studios, Bela Lugosi, Charles Lindbergh, directors Tod Browning and George Melford, Theda Bara and her films, Hungary and the Habsburg Monarchy. Whew! It was fun but a little exhausting.

Well, since Robert De Niro is too old to play a young Irish immigrant, I guess we would need to find a young Irish actor. I’m not that familiar with current actors so I am open for suggestions.

Just do it. I have talked with some who want to write, but are stuck on figuring out which laptop and writing program to buy, how to make an outline for the whole book, what to name the book before it is written… Just start writing. You will make mistakes along the way like I have, but your writing will improve each time and eventually you will learn how to write a book.

I took a little detour to Los Angeles on my last book, but the next one will be a return to Oak Island! Most likely a Glenn and Glenda Oak Island Mystery. That’s what has been forming in my mind.

Eric Idle’s “Always Look on the Bright Side of Life” (I love Monty Python) and “The Crime of the Century: Richard Speck and the Murders That Shocked a Nation”.  It’s kind of a laugh and cry thing (he says, as if he knows the questions to follow).

I’m so surprised you asked this question! Laugh: Monty Python, Tim Conway skits on the Carol Burnett Show, the movies “Blazing Saddles” and “Young Frankenstein”, my wife and kids.

Cry: my plugged punctum (see earlier question)—tears stream down the right side of my face constantly.

Bela Lugosi! My character Daniel O’Dwyer is obsessed with him throughout my first three books, which led to the current book “Of Vamps and Vampiros”. He was such an interesting man, much more than Count Dracula. As an aside, on our last visit to California, my wife and I visited his grave in Culver City and someone had spread a loved one’s ashes over his grave marker!

Writing, bad golf and yodelling (one out of the three is fictitious and you get one guess).

I’ve been watching “The Walking Dead” since the first episode and while I watch a variety, it seems a lot of the shows I watch are of a horror/sci fi bent. As for films, to be honest, I haven’t had time to watch a lot lately. I’d have to say my favorite new film is Frozen II (or at least the credits).

Being of a certain age, my favorite foods are those that aren’t spicy and don’t upset my delicate gastrointestinal system.

Music is a bit harder. I like most types and music seems to find a way into all my books. When I write I listen to reggae. My latest book, since it is set in the 1930s, I tried to write to music of that period. That didn’t work as it just distracted me, so I put the reggae back on.  As for a favorite artist, I’ve always been a Jimmy Buffett fan.

“What is your favoritecolor?” “Blue. No, yellow…..auuuugh!” That’s for all you Monty Python and the Holy Grail fans (Scene 22). Actually my favoritecolor is green.

Laughing with family and friends (in between drooling).

Well, my main character in Mantis Preying states that this will be on his tombstone, so I guess it would be okay for mine:

“Here lies Daniel O’ Dwyer: A jellyfish, a boot and a groin afire” 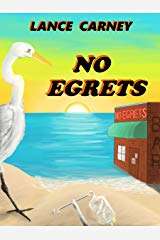 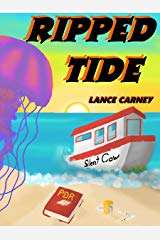 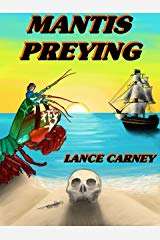 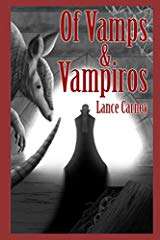 1 thought on “Here is my interview with Lance Carney”