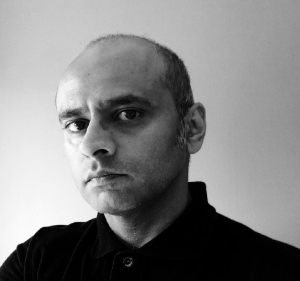 Where are you from?

I was born in Leamington Spa, Warwickshire and I live in Rothwell, Northamptonshire.

I’m Midlands born, partly Southern bred, second generation British Sikh. My family came over to England in the Fifties and Sixties and I was the first of the new generation to be born here. I’m married with a step-daughter. Education wise, I didn’t do as well as I should have done. I was a little lazy by the time it came to exams and also discovered the delights of beer, girls and music so I got a little distracted.

I’ve just released ‘Tales of Blood and Sulphur: Apocalypse Minor’ as part of a 5 year deal with the publishers Booktrope. ‘Tales’ has been released under the Forsaken Horror imprint. That was released at the end of July and it’s been pulling in some great reviews which is always encouraging. Being the kind of guy I am, I haven’t rested on my laurels. I’m currently working on two novels, a novella and I’m sketching ideas and shapes for next year’s releases of which there will be three, all being well. You should see another Clay book by the end of 2015 and that one will be my first full length novel release. It’s called ‘H.A.D.E.S’ and if you want to know what that stands for, you’ll have to wait for a little while.

I began at school. I used to love ‘Doctor Who’ and ‘Blake’s 7’ so I’d write my own adaptions of episodes in Composition classes. That would have been around the early Eighties. I also starting getting into horror at that point, thanks to my uncles and their collection of books by King, Herbert, Masterton and Straub. They corrupted me haha. I loved what I was reading and seeing at the time and wanted to put my own spin on it.

It’s only been recently to be honest. I’ve always loved writing but I dithered about for years before actually taking the plunge and self-publishing the original ‘Tales of Blood and Sulphur’. That was when I started to take it a little more seriously.

‘Tales’ is a collection of short stories so there’s multiple inspirations at work there. The stories were influenced by films, books, even a dead patch of grass in my back garden.

Fun but grim is probably the best way to describe my writing. It’s definitely horrifying but there’s a sly sense of humor at work.

That’s a question that I still haven’t been able to answer. I really can’t come up with an answer. I’m glad I managed to come up with such a strong title. The original title was ‘Bozo Nightmares’. I don’t think that would have had much of an impact.

There’s no central clear-cut message in the stories. I deal with range of themes such as obsession, desperation, idealism, racism and the death of hope. I don’t like to preach at people or be blatant with any messages. It’s better for the reader to take whatever they get from the stories themselves rather than bash them over the head with ideology.

Not much haha. A few of the locations are real. In fact, some of them are right on my doorstep. The situations themselves aren’t.

A combination of both. My own life has thrown up some quite interesting moments and I’m surrounded by really interesting people. People tend to write off small town people as if living in a big city somehow elevates you and makes you more of a character. I don’t agree with that at all.

Stephen King’s Salem’s Lot, James Herbert’s The Fog and Clive Barker’s Weaveworld. They’re three books that I could read over and over again. I’d love have any of those writers as a mentor, with the exception of James Herbert who sadly passed away in 2013.

I’m about to start ‘Reinheit’ by one of my fellow Forsaken authors, Thomas S. Flowers. It’s about a chair that once belonged to an SS officer. I’m also reading a lot of books about London’s Docklands and Sewers as research for ‘H.A.D.E.S’ which should give you a tiny idea of what the books about.

There’s quite a few really good horror authors about at the moment, Thom being one of them. There’s also Robert Pruneda, AJ Aalto, and my fellow UK author, Claire C. Riley. If you love zombies, then Claire’s definitely the writer for you.

‘H.A.D.E.S’ which I’ve briefly mentioned before. I’m also working on a novel called ‘Parfitt’s Key’. That actually started out as a short story tribute to a good friend of mine. The short began to grow out of control and it’s now a fully-fledged novel. I’m not quite sure what to do with it as yet but it was one of those instances where I had to write it. The story was too good to let go. I’m also working on a novella called ‘The Vampire of Small Heath’ as well as numerous short stories. I don’t tend to rest much between books

There hasn’t really been an entity as such. I’ve made friends with a lot of authors from a range of genres and every one of them has been supportive. Beyond that, there hasn’t been anyone else.

Absolutely. It was what I was born to do. It’s my passion. A 9-5 job is great for paying the bills but not something that I’d want to do right up to retirement or death. There’s much more to life than that.

To be honest, there isn’t much I’d change. It was rewritten extensively before release and I’m happy with the changes.

That moment when you start something new. I always find that part a little intimidating

It has to be Stephen King. Clive Barker comes a very close second but King just shades it. I love the way he fleshes out his characters. They aren’t two dimensional caricatures.

For Tales, it was a lovely lady called Ashley Rugirello who is one of the in-house designers for Booktrope. I didn’t give her any real brief or guidelines other than the font. I sent her the cover for the older version and she just ran away with it and came up with the ‘hands reaching out of the darkness’ cover. I love it.

The wrap around story. There wasn’t one in the original and my editor came up with the idea of having a story that would bookend the collection. Coming up with a plausible story was the hardest thing about ‘Tales’ by long shot.

Not from writing the book itself, but I’ve learnt that I hate doing the marketing haha.

Read lots and write lots. Very important. Also have a passion for what you’re doing. I read something by a UK journalist recently where he said that he doesn’t like writing? I can’t get my head around that. If you don’t like it, go and do something else. Lastly and most importantly, just keep persevering. Writing’s a tough game. Some people get the lucky breaks and become overnight sensations but for the majority of us, it’s about getting on with the job and battling through it.

Just that I hope you all continue to enjoy my work and keep spreading the word.

Loads of things make me laugh. I’ve got a bit of a silly sense of humor. There’s not much that makes me cry these days. Other than Birmingham City getting relegated, that is.

Martin Luther King. Or maybe Bruce Lee. Two legends in their own right and hugely inspirational.

Fiona: What do you want written on your head stone and why?

I’m going to be cremated and my ashes scattered so there’ll be no headstone.

Fiona: Other than writing do you have any hobbies?

I play the bass guitar, rhythm guitar and I’d love to learn the drums. I also read a hell of a lot

Doctor Who without a doubt. I haven’t missed an episode since the late Seventies, even during the troubled Sylvester Mcoy era. The Walking Dead, for obvious reasons. Filmwise, I love the original Star Wars trilogy and horror films (of course)

Food: Anything spicy especially curry. Favorite color has to be Blue (being a Birmingham fan, it kind of has to be). Musically, I’ve got a very eclectic taste although I’m really fond of indie, ska, reggae and punk.

A director or an astronaut.

I do indeed. It’s called Clay’s Place and you can keep up to date with what I’m up to there. There’s also a blog and because the site is a work in progress, there’ll be some additions to it in the future: http://www.jgclayhorror.com/.

I’m also on social media so please pop by and say hello. I always reply back.

Thanks for having me.

Links for Tales of Blood and Sulphur: Apocalypse Minor 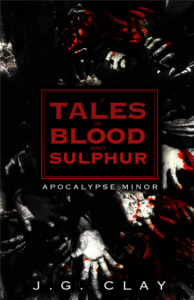 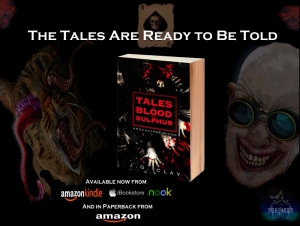