I was born in Akron, Ohio, and lived there with my parents and older brother and sister, until I left for college, very eager to get away from my family and from Akron.

I enrolled at the University of Michigan, Ann Arbor.  My goal was to find out how the world works.  An effective beginning toward that goal came from four of my most stimulating classes:  American constitutional law, Shakespeare’s plays, modern poetry, and introduction to economics.  I graduated with a double major in political science and English literature.

My mother, who wanted my goal to be finding a husband, complained that she must have done something very wrong in the course of raising me.  My father, the successful owner of a men’s clothing store, asked me how this goal would get me a job.

At the time, I had no answer to that question but loved the excitement of moving from one place to the next to find out. I started as a copy girl/occasional reporter on a weekly labor newspaper in Washington, D.C., then moved to Long Branch, N.J. to work for two years as a staff reporter on a daily newspapaper.

As a teenger in Akron, I had seen a magazine picture of the California coastline, where the Coast Range met the Pacific Ocean and decided that some day, I would live in California.  So, from New Jersey    , I drove across the country to Los Angeles  and found a job as a reporter, editorial and feature writer on a small suburban newspaper.  At a UCLA world affairs meeting, I met a British philosophy student on a Fulbright scholarship.  We decided to live together as a preview for getting married, so I went to England with him.  I had no hesitation about leaving the U.S as I had wanted to live at least for a few years in Europe.  In London, I worked as senior reporter, editorial and feature writer on a small suburban newspaper.

I first thought of myself as a writer when, at age eleven, I wrote a rather grim short story about my unhappy family.  My sister urged me to rewrite it with a happy ending, which permanently ended her role as first reader.

I don’t know that I have a specific writing style.  As a playwright, I write both drama and comedy, and the tone of most of my work is ironic realism.

My early focus as a writer had been short stories until I took a writing class at Massachusetts Institue of Technology, about two years after I came back to the U.S. from England, having decided not to marry the British philosphy student.  Living in Cambridge with an MIT linguistics professor, I was able to attend classes at MIT free of charge.  The writing instructor liked the dialogue in my short stories and suggested I turn one of them  into a play.  I did that, and when I came back to Los Angeles, the play was produced with three other one-acts, including one by Tennessee Williams, an inspiring proximity.

Back in Los Angeles, I began working as a writer and communications director in political campaigns for Democratic candidates for public office.  That experience led to my writing several political plays, which are published in one of my play collections, POLITICS AND CORRUPTION, Three Plays.  Like most of the characters in all of my plays, they are the combined product of real people and invented ones.  As convincing fiction requires that we write what we know, my plots are based on real life situations that I know well enough to bring them to life on stage.

I write often about the highs and lows of our relentless effort to find lasting love.  Some of these plays are in my collection, COUPLES IN CRISIS, Five plays.  There are both full length and short plays, drama and comedy, in this book, which includes a play that was produced at an Edinburgh Fringe Festival and another that was produced in Bologna in an Italian translation.

After several highs and lows in my own search, I found very deep love with my husband, a Stanford professor of biopsychology.

My third collection, SOCIAL ORDER UPENDED, Two Plays, includes a farce about the Mafia taking over charity and a comedy about older hippy followers of The Grateful Dead, before and right after the death of Jerry Garcia.

Currently, I am reading Hilary Mantel’s Bring Up The Bodies and Ron Chernow’s Titan, a biography of John D. Rockefeller

My current projects include a new play, now in its third draft, titled, Deception, and another new play, still in its first draft, called, Higher Education, both full-length dramas.

The most challenging part of writing for me is aiming and working for perfection.  I rewrite until I feel that every line of dialogue takes readers and audiences on a journey that will let them momentarily step out of their world and enter the world of my play.  When they leave the world of my play, I would like them to feel they have spent time with people they cared about and whose journeys offered them a new insights on reality. 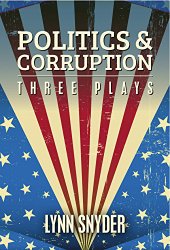 A political thriller in which a Washington intern disappears and the Ohio congressman with whom she was having an affair is suspected of being complicit in her murder.

Political and romantic fireworks converge during a three-way race for a Congressional seat, as political professionals in opposing campaigns walk a tightrope between crises in their romantic relationships and their

A young woman disappears in a quagmire of condo corruption,

and three people turn suspicion on each other.

Lovers And Other Furnishings

In the wee hours of a New Years Day, four men find a tantalizing, bizarre invitation on their answering machines from a woman each of them used to live with, asking them to retrieve the things they left behind.  Three of them answer the call.  Goading, ribbing and clashing with each other, the men flash back to their lives with Jessica and reveal  surprises about themselves.

A twenty-five year marriage and a twenty year friendship are imperiled when Sam has cocktails with his friend Eli’s wife at the Polynesian Lounge in Wadsworth, Ohio, and Eli meets Claire on a flight from San Francisco to Cleveland

Unmasking a lie proves dangerous to friendship and two marriages.

A comedy in which the fear of mortality threatens the 34-year marriage of an irreverent couple when they find themselves locked into the walled patio of a synagogue.  Recriminations about a secret and about their Atheist daughters challenge them to a near breaking point, but they share something that not even a clash between Jewish and Hindu gods can match.

A math professor takes revenge on the post office by scattering his junk mail on the floor, as an art professor at the same college enters to mail a letter.  Sharing memories of the days when they were young rebels in the sixties, they enjoy a brief love affair atop the scattered mail, before a bitter misunderstanding leaves the relationship, teetering in the balance.

A comedy in which four youthful, lively senior Deadheads, playing Grateful Dead songs in their own band, are getting ready to  celebrate the Grateful Dead’s 30th anniversary, when they suddenly are confronted with a life-and-death decision, which they meet in the true spirit of their hero, Jerry Garcia.

A farce in which a Mafia boss foils the impending downfall of organized crime by taking over charity and running it better than the do-gooders, one of whom becomes his lover and threatens to replace him.

Published plays in print include Air Pockets and A Sense of Humour, published by Three Wise Monkeys Press and Gypsy, published by Rockford Writers’ Guild.

Lynn has had playwriting fellowships and grants from the Jerome Foundation, Theater in the Works at the University of Massachusetts, Helene Wurlitzer Foundation and Mary Roberts Rinehart Foundation.

She has worked as a reporter, editorial and feature writer for newspapers in this country and England before turning to publicity and speech writing for political campaigns in Southern California.

1 thought on “Here is my interview with Lynn Snyder”