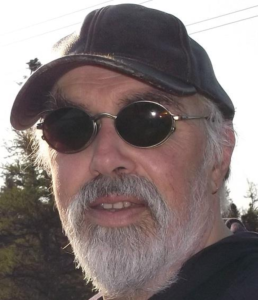 Where are you from:

A little about your self `ie your education Family life etc :

I was raised in a steelworking town in North Ayrshire that started going to seed when the steelworks closed in the mid 70s just as I was about to leave school. Mum and Dad are still there, in the house we moved to when I was 5. I left in ’75 to go to uni, got a degree in Botany ( no, it doesn’t mean I know about gardening ) then went on to a career in IT in London, Aberdeen and Edinburgh before, in 2007, I’d had enough. With my wife we sold up in the UK and moved to Newfoundland, Canada, where we live on the shore with icebergs, whales and bald eagles for company.

The newest of the new news is that I’ve sold a story to THE MAMMOTH BOOK OF JACK THE RIPPER, coming from Little Brown later in 2015. This makes me happy for several different reasons.
Fiona: When and why did you begin writing?

I grew up on a council estate in a town where you were either unemployed or working in the steelworks, and sometimes both. Many of the townspeople led hard, miserable lives of quiet and sometimes not so quiet desperation

When I was at school books and my guitar were all that kept me sane in a town that was going downhill fast. The local steelworks shut and unemployment was rife. The town suffered badly. I -could- have started writing about that, but why bother? All I had to do was walk outside and I’d get it slapped in my face. That horror was all too real.

So I took up my pen and wrote. At first it was song lyrics, designed (mostly unsuccessfully) to get me closer to girls.

I tried my hand at a few short stories but had no confidence in them and hid them away. And that was that for many years.

I didn’t get the urge again until I was past thirty and trapped in a very boring job. My home town had continued to stagnate and, unless I wanted to spend my whole life drinking (something I was actively considering at the time), returning there wasn’t an option.

But my brain needed something to do apart from write computer code, and fiction gave it what was required. That point, almost twenty five years ago now, was like switching on an engine, one that has been running steadily ever since.

In a way I always have, but the epiphany came in 2005 when I sold a story to a professional anthology, NOVA SCOTIA. I got to stand at the launch with Charlie Stross, Ken MacLeod and a load of other award winners and I thought — I can do this.

The first novel was ISLAND LIFE and it came from various trips to small British coastal towns and islands. I’ve always loved the sea and it all came out on that first book.
Fiona: Do you have a specific writing style?

Pulpy adventure with lots of action and dialogue. And monsters.

Stay away from monsters. They’ll eat you.

Sometimes things from real life make it into my work, but mostly I make shit up. It’s who I am, it’s what I do.

No mentors — I did it all my own way. As for influences… It would have to be the reading I did in the genre as a teenager in a small West Coast Scotland town in the early-seventies, before Stephen King and James Herbert came along, that were most formative.

I graduated from Superman and Batman comics to books and I was a voracious reader of anything I could get my hands on; Alistair MacLean, Michael Moorcock, Nigel Tranter and Louis D’Amour all figured large. Pickings were thin for horror apart from the Pan Books of Horror and Dennis Wheatley, which I read with great relish. Then I found Lovecraft and things were never quite the same.

Mix that with TV watching of Thunderbirds, Doctor Who, the Man From Uncle, Lost in Space and the Time Tunnel, then later exposure on the BBC to the Universal monsters and Hammer vampires and you can see where it all came from. Oh, and Quatermass. Always Quatermass.

I have a deep love of old places, in particular menhirs and stone circles, and I’ve spent quite a lot of time travelling the UK and Europe just to visit archaeological remains. I also love what is widely known as “weird shit”. I’ve spent far too much time surfing and reading fortean, paranormal and cryptozoological websites. The cryptozoological stuff especially fascinates me, and provides a direct stimulus for a lot of my fiction.

Just about to start Dan Simmon’s new one, where Sherlock Holmes meets Henry James. I’m looking forward to getting immersed

I’m a big fan of Gary McMahon—a British writer who has a strong vision and voice, and matches that to some great disturbing storylines. Seek him out folks—he’s the real deal.

Recently finished and delivered a novel to DarkFuse, the 5th in a 7 novel contract with them. So 5 down, 2 to go. I have a tickle of an idea for the next, and right now I’m waiting for it to gestate.

As I said, I did it my way—I’m not one for joining writers groups and associations. It’s all either my own fault or my own hard work.

These days, definitely. I do it full time, and if I didn’t treat it as such, I wouldn’t be able to eat.

Nope — the one I’ve just delivered is fast paced, pulpy fun and I’m rather proud of it.

I answered that above—started with songwriting and grew from there.

Nope — I have no idea yet what it’s going to about.

Here it is in its current entirety.

“I thought it was all Carlos Castaneda, mescalin medicine man bollocks,” the girl said as she wiped blood from her brow. “How was I to know the fucker really meant it?”

Getting the ending right is my biggest problem. I get an idea, rush at it and beat it to a pulp, then try to get it to resolve into something that makes sense when it’s finished.

I don’t have one particular favorite but across the whole span of my reading life—fifty years now—Raymond Chandler has stayed a constant. I could never write like him, but I learned a lot about plotting and character from him. I don’t read him to study his craft though—I read him for pure, unadulterated pleasure, and he delivers every time. The Long Goodbye in particular is a slice of genius.

Nope. I sit at a desk overlooking a Newfoundland shoreline and watch the sea. All the traveling is done on my head.

I have many books. The most constant designer recently has been M Wayne Miller who I’ve worked with on my Carnacki, Sherlock Holmes and Challenger books, and in one offs like The Creeping Kelp. The lad’s a genius.

They all vary. Some are easy, like THE INVASION which came in one mad rush, some take longer and need more thinking time.

I’m constantly learning—something new with every work. 25 novels and over 300 short stories so far. That’s a lot of learning.

Write, write then write some more. If you feel doubt, don’t stop. Write until you don’t doubt anymore, or until the doubt doesn’t matter.

Buy more of my books. Then buy more. In fact, just buy them all.

Seriously though, I’m very thankful for every reader I have, and I hope I’m able to bring a little entertainment and fun into their lives along the way.

I remember various kiddies things, the main one being something called ‘Lofty Joe and the Lion Cub’ when I was 4. I also read a lot of comics back in the early ’60s but the first longer thing I remember would be Treasure Island when I was about 8. I found the Hobbit not long after that and things were never quite the same again.

Cry: Danger / sickness happening to loved ones. Child abuse. Animal abuse. And “Who Knows Where the Time Goes” by Fairport Convention.

Fiona: Is there one person past or present you would meet and why?

Probably Robert Louis Stevenson, who I’ve idolized as long as I can remember. Plus I want to know the trick to writing a Treasure Island or Doctor Jeckyll and Mr. Hyde for the 21st Century.

No tombstone. I want my ashes scattered at sea to sleep with the fishes.

I’ve been playing guitar badly since 1973.

I still play guitar and write songs but I’d have loved to spend time recording and touring in a band.

I have a website at http://www.williammeikle.com and apart from that I mostly hang out on Facebook at https://www.facebook.com/williammeikle Mostly.