Where are you from Sussex, UK

I was born in Sussex in 1983 and was the youngest of two children. I studied at the local community college until the age of 18, obtaining ten GCSEs and two A-Levels (none of them in English or creative writing by the way!) when I left to work full-time in a local shop.  Since then I have held many jobs from potato peeler to carpet fitting assistant, until finally finding myself building a career in finance (yawn!) where I still work today.

I have finally completed the first draft of my new novel! -A disturbing horror novel called ‘The Damaged’. You can follow my progress on Facebook (https://www.facebook.com/TheDamagedNovel)

Hopefully due for release this year.

Do you really want the whole story? From the beginning? How much time do we have?

After leaving college around the turn of the millennium myself and a few old school friends had the aspirations of becoming film makers. We bought ourselves all the equipment: the cameras, the microphones, the expensive editing software etc…  We started off making short, arty little films that never amounted to much, before I eventually wrote the script for a feature film – an ironic ‘B-Movie’ style Sci Fi flick entitled ‘Attack of the Martian Dinosaurs’.  The film itself is still available online if anyone ever fancies a giggle or to roll their eyes in despair! (https://www.youtube.com/watch?v=djHEs067cgI) After a long and soul-destroying nine months, the film was finally completed. I sat down with my friends and watched the film back, and while the film was amusing, I couldn’t help thinking to myself that ‘this just wasn’t the vision I had in my head’. My vision had been restrained and restricted by the tools available to me, by the budget I had available to me, and by the poor acting abilities of my friends! (sorry guys, but it’s true!) It was then that I started to write my first novel and immediately felt myself liberated from all the restraints. I finally had free reign over everything, and the only limitations were my own imaginations.

After my first novel ‘Bringing Forth the End of Days’ (http://www.amazon.co.uk/Bringing-Forth-End-Days-Simon/dp/1608602036/ref=asap_bc?ie=UTF8) was published, printed, and I held the first copy of it in my hands

After my brief affair with Science Fiction in my first novel, with ‘The Damaged’ I now find myself snuggling quite comfortably into the blood-red leathered chair of horror, where I now intend to stay.

I don’t like to sugar-coat the ugliness of the human psyche; in fact, I like laying it bare and exploring the depths of what makes some people tick, and eventually crack. I never feel more at home than when I’m paddling around in the grim darkness.

‘The Damaged’ refers to both of my main characters in the book, both of whom have been quite severely affected by incidents in their past which continue to haunt them. It refers to the psychological wounds they both have which prevent their minds from reacting to situations in a way we would consider ‘normal’.

Like ‘a moral to the story’ type of thing? No, I’m afraid this ugly duckling never turns into a swan, because real life is no fairytale, and neither is my story. But saying that, it doesn’t mean there aren’t lessons to be learnt, there are many, but they are for the reader to reach on their own accord.

Hopefully – all of it. I think belief and realism are at the core of any good story. If you don’t believe in the characters, then you wont care what happens to them, and your story becomes meaningless. (This is the main reason I have very little time for Fantasy novels) Some People have suggested that certain sections in the novel are a little ‘too’ realistic for them, that the grim horror of the details made them feel uncomfortable and uneasy, but as I have already said, I don’t believe in sugar-coating the ugliness.

Yes, no, a bit of both, but that would be telling 🙂

I don’t think you can write honestly and passionately about any subject matter that doesn’t have some meaning or relevance to you. Events in my life and people that I meet are inevitably molding my thoughts, be it consciously or subconsciously.

I’m between books at the moment. I recently finished ‘Revival’ by Stephen King, and have a gap until his next one is released in June. Any suggestions? If I don’t find something that grabs my attention then I’ll probably fall back upon an old classic to tide me over, probably something from Edgar Allen Poe.

I need to get ‘The Damaged’ fully proofed and polished before hopefully releasing it later this year. Then, depending on it’s reception, I shall begin on the sequel.

For me it is a passion. Whether or not it turns into a career is in the hands of the gods (or the critics!)

In my latest book? No. I believe I have learnt from all the mistake made in my first book. Hopefully ‘The Damaged’ has not repeated the same mistakes again, but I will defer to the critics on that one, who I’m sure will let me know in due course!

It’s currently in ‘Post-Production’, but here’s a brief synopsis to whet your appetite:

“Amidst the blistering storm of ’87, a homeless man desperate to find shelter from the harsh conditions forces his way into the home of young Matthew Mason, and brutally murders his family before him.

After 25 years of torment, Matthew is released from a mental institute under the watchful eye and care of Tammy Atkins, a Care Worker with a secret history of alcohol abuse and self harm.

As Matthew struggles to adapt to his new found liberty, he finds himself continuously plagued by the demons of his past. Haunted by strange and ghastly images and urges, Matthew sets himself upon a path of vengeance, determined to seek out his parents’ killer and to put his demons to rest once and for all.  “

Since I’ve read every single one of his books, then I’d be amiss not to give this title to Stephen King. I like the intelligence of his stories and the depth of his characters, especially so in later works, though I do miss the gore and shock factors that some of his earlier work had.

I generally set all my stories close to where I live, but I do often get in my car and drive down the streets to get a feel.

The hardest part is always getting the emotions just right, especially when characters are experiencing a deep and complex combination of feelings

Don’t give up, don’t give in. When the world gives you lemons just suck them with a smile and act like you’re enjoying it. If you don’t have thick skin then you’d better develop some quick

Thanks for all the fish ! (That’s a Douglas Adams reference btw)

The very first? No idea, you’ll have to ask my mum that one. I imagine it was probably ‘The Very Hungry Caterpillar’ – that was a classic (!)

My first  ‘grown-up’ book was ‘Carrie’ by Stephen King. I think I was about 11 at the time.

Laugh – Seeing people fall over or get hit by a Frisbee.

Cry – Running out of coffee or cigarettes.

Yes, far too many to list. They’re becoming a real problem!

I love horror in all forms (although my girlfriend normally makes me watch them on my own!) I was born in the 80s, so ‘Freddy’, ‘Jason’, ‘Chucky’ and ‘Pinhead’ were all household names to me from a very early age.  The recent surge of TV horror has had me captivated too; shows like ‘Dexter’, ‘Bates Motel’ and ‘Hannibal’ are all really good shows. 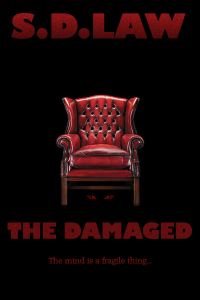 1 thought on “Here is my interview with Simon Law”