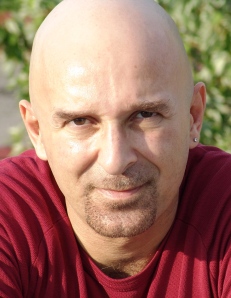 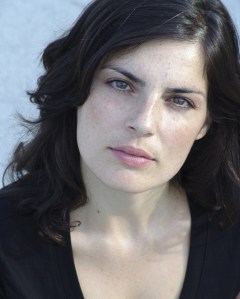 Age: 50 & 44 respectively
Fiona: Where are you from?
Montreal, Quebec, Canada
Fiona: Tell us a little about yourselves i.e. your education, family life, etc.
We’ve been together for 22 years. We started as an acting team but soon began to write our own scripts. We wrote and toured four full-length critically acclaimed plays to packed houses across Canada and the United States, including, Bad Boy, which we performed Off-Off-Broadway at New York’s Creative Place Theatre in the heart of Times Square.

Shortly thereafter, we were approached to star in and rewrite the short film, Things Never Said in Playa Perdida. Playa won the audience award at the New York Short Film Festival and tied first place at the Festivalisimo festival in Montreal
We then decided to start our family and our work kind of took a back seat for a while. We now have two kids, Daphne (13) and Achilles (7), a husky/collie, Olive, and two pterodactyls, er, we mean lovebirds.

Fiona: Tell us your latest news?
We had taken a sabbatical from acting but were recently approached by a theatrical agent. We look forward to auditioning and getting back into the groove of acting.

Fiona: When and why did you begin writing?
The first thing we wrote together was a two-person full-length stage play that we toured across Canada in 1994 titled Cocaine Eyes. Based on lyrics Johnny had written a few years back, we wrote it for lack of finding a two-person play that we could tour. (Cocaine Eyes was picked “Best of the Festival” in several cities.)

Fiona: When did you first consider yourselves writers?
We don’t know that we do. We write. We act. We produce. Direct. Create. We keep busy artistically because that’s the kind of people we are. 

Fiona: What inspired you to write your first book?
WHEREWOLVES started as a screenplay we completed in 2010. It was soon optioned but when the production fell through over a year later, we decided to adapt it into a novel.

Fiona: Do you have a specific writing style?
Perhaps because of our stage and screen writing background, where every word must count for something, you could say that our writing is fast-paced and very visual.

Fiona: How did you come up with the title?
The title, WHEREWOLVES, manifested while we were writing the story. When you read the novel, you’ll understand why ‘werewolves’ is misspelled.

Fiona: Is there a message in your novel that you want readers to grasp?
We hope people come away with knowing that we, people, are often guilty of misconceptions, that words can hurt much more than bullets, and that, yes, we do have to be kinder to one another.

Fiona: How much of the book is realistic?
All of it. We mean, the plot is pure fiction but everything that happens could happen. And, as a matter of fact, the scene with Gary and his response to the brownie, (the most unrealistic scene, we’ve been told) is a scene that we actually experienced at a Friendly’s in Tacoma, Washington in 1994.

Fiona: Are experiences based on someone you know, or events in your own life?
Most of the characters are people, or combinations of people, we know, met, or came upon at some point in our lives.

Fiona: If you had to choose, which writer would you consider a mentor?
Playwright and screenwriter, William Mastrosimone.

Fiona: What book are you reading now?
Right now we are both just reading the Magic Tree House series to our youngest. When we’re in full writing mode (like now) we don’t usually read for our personal pleasure so that we’re not influenced by another writer.

Fiona: Are there any new authors that have grasped your interest?
Many indie authors have, actually. There are too many to name and it would be unfair to pick just one or a few.

Fiona: What are your current projects?
WHEREWOLVES TOO, the screenplay and novel.

Fiona: Name one entity that you feel supported you outside of family members.
Twitter. Thanks to Twitter, we have ‘met’ many awesome indie authors, indie author supporters, indie novel readers, bloggers, etc. Twitter has really helped get word of our book out.

Fiona: Do you see writing as a career?
More than a career, it’s a way of life.

Fiona: If you had to do it all over again, would you change anything in your latest book?
Nope.

Fiona: Can you share a little of your current work with us?
It’s too early to share anything right now; we are still in the beginning stages of development.

Fiona: Is there anything you find particularly challenging in your writing?
We are not big on artistic license and always try to keep the story real. That can be rather challenging at times.

Fiona: Who is your favorite author and what is it that really strikes you about their work?
We both agree that our favorite author is William Mastrosimone. From plays, to screenplays, to novellas, he knows how to capture the story’s and characters’ humanity.

Fiona: Do you have to travel much concerning your book(s)?
We wish. We love to travel.

Fiona: Who designed the cover?
We found and/or bought the photos we wanted to use and came up with the main design. Jenny Robson created the final cover. A big thank you goes to David Haworth for allowing us to use his “Harvest Full Moon Rise”.

Fiona: What was the hardest part of writing your book?
Balancing our time between our children and our writing.

Fiona: Did you learn anything from writing your book and what was it?
For WHEREWOLVES to work, we had to write using many different characters’ POV (point of view). Thanks to our editor, we learned a lot about narration and scene changes.

Fiona: Do you have any advice for other writers?
No matter how awesome you think your writing is, hire a professional editor.

Fiona: Do you have anything specific that you want to say to your readers?
Thank you very much for your support!

Fiona: Do you remember the first book you read?
Olga: I read A LOT as a child. I was a huge fan of the Nancy Drew and Hardy Boys mysteries. But the book that I remember had a significant impact on me was The Vengeance of Wol by Joan Seager. I think I was 8 or 9 when I read it.
John: Dick and Jane. 

Fiona: Other than writing do you have any hobbies?
With everything else that we do, we don’t have time for hobbies.

Fiona: What TV shows/films do you enjoy watching?
Seinfeld—we never tire of the reruns. The Walking Dead. Breaking Bad. 24. Game of Thrones. Horror films and comedy.

Fiona: Favorite foods / Colors/ Music?
We both love Greek food and sushi, are fans of the color green, and have pretty eclectic tastes when it comes to music; we love everything from classical music to AC/DC.

Fiona: If you were not a writer what else would you like to have done?
Act. And we do.

Fiona: Do you have a blog/website? If so what is it?
Sure do, it’s http://www.wherewolvestheblog.com You can view our book trailer, read the first two chapters FREE, and much more.
Thank you very much for having us, Fiona, and thanks to all those who stopped by! 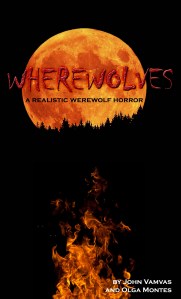 “KEPT ME ON THE EDGE OF MY SEAT. GETS YOUR PULSE POUNDING.” Author and award winning investigative journalist, Victor Malarek

“5 stars. A MUST READ!”
“5 stars. It reminded me of Lord of the Flies versus Silver Bullet but only way cooler.”
“5 stars. Finally! A thriller that is unpredictable. A real page turner that expertly knows how to balance dialogue and description.”
“5 stars. Amazing storytelling!”
“Chillingly terrifying… This is one horror novel that will have you thinking long after you’ve finished reading.”
The book trailer to WHEREWOLVES